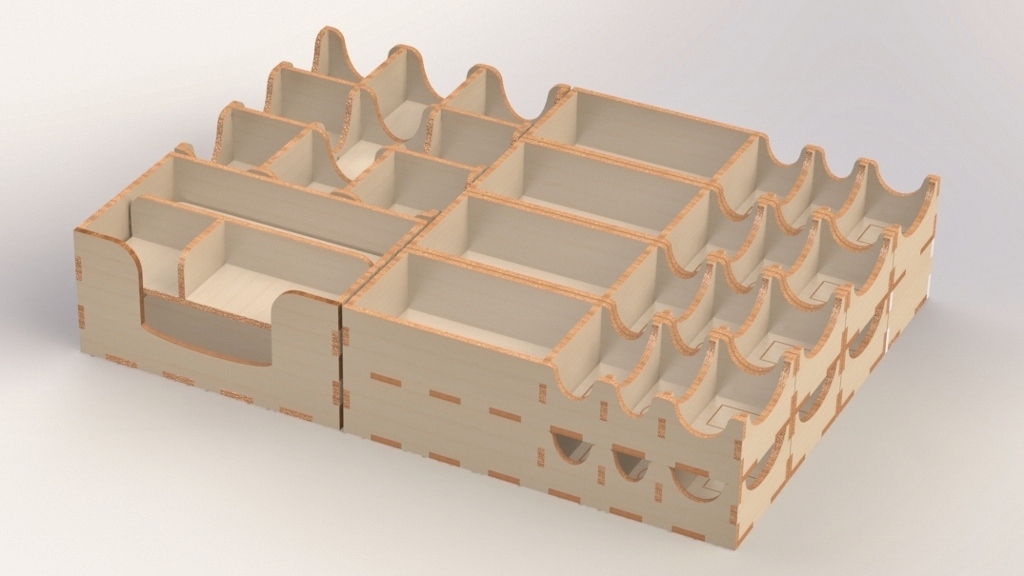 This prototype has been updated to better fit the core game and the Fire & Ice expansion, check out the newest revision HERE

I posted a survey on my Kickstarter and decided to get the top three inserts designed. One of those three was for the board game Terra Mystica.

My attempt in every insert I design is to decrease setup and pack-up time of a board game and try to consolidate expansion boxes into the original core game box. For the first time I found I was unable to accomplish both of these goals. Terra Mystica contains a large number of components but that I can deal with. That’s just dimensions, organization, maybe a little trigonometry. This game was the king of cardboard sheets when you add its expansion. A pile of faction boards, new mechanics required boards and it added an entire extra map. For me its all or nothing. I’m not going to throw away the original map or have it sit alone on a shelf. I accepted the fact that this insert would cover the base game and the base game alone.

My main issue with this game isn’t the large number of components or the super thick stack of cardboard, Its the excessive number of player bits. It’s a 5 player game at max but it comes with 7 different faction colors. I’m all down for variety but to add another 2 colors of faction, now totaling 9, with the expansion basically doomed this game to never fit in its core box.

I give you the Thinker Tinker Maker Terra Mystics Insert: