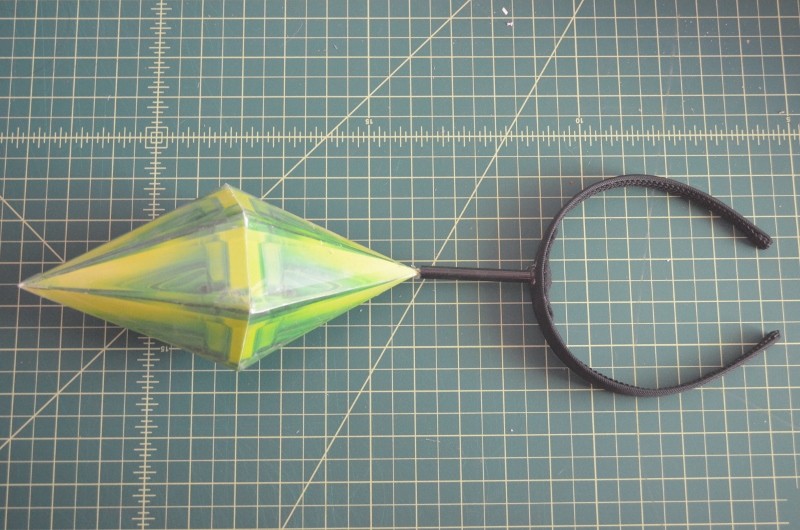 For a quick and easy costume

In 2011 I had found myself in a sticky Halloween situation. I was in the middle of my term at the University of Illinois at Urbana-Champaign (distance ed), and I was preparing to go to Champaign, IL for a four-day required trip to campus one week prior to Halloween. Thinking that I was not going to be celebrating Halloween  because of my workload, the trip, and no party plans, I had not prepared a costume, although Stefan had been preparing to go to work as an Aperature Scientist for quite some time. So, when the invitation to a Halloween party came from some friends, I was torn as to whether to attend. On the one hand I wanted a break from school and a chance to socialize, but on the other hand, I was not prepared, and I had no clue what I should dress as being that my preparation time was limited. Giving the thought some consideration prior to my trip, I came up with the ingenious plan of going as a character from my all time favorite video game (at least the one I play most frequently, and I’m pretty sure I was playing it at the time I thought of my costume), the Sims (at the time it was 3), which would be not only incredibly easy to construct, but would also tie into Stefan’s video game themed costume.

The premise of the costume was quite simple, as I was going to go as myself just as a Sim. So the most essential part of the c 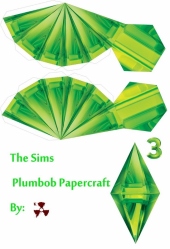 ostume would have to be the iconic Plumbob that glows over the Sims heads. Originally I was planning on creating one myself with just green paper, but while searching around on the internet I actually found an amazing rendition of the Plumbob by Deviant Artist Killero94, who had created one and allowed users to download the image for their own use. Having this design, I was able to get more creative, and I decided that I would try to take my costume one step further and get the plumbob to glow. END_OF_DOCUMENT_TOKEN_TO_BE_REPLACED

Since Halloween of 2013, Stefan had been contemplating what to do next for a costume, and by mid-February, we had yet to come to a conclusion on what to do. Being that Halloween 2014 would be the first Halloween neither of us had academic obligations prior to and during October, we were trying to come up with more complex costumes compared to our costumes of the past. We also wanted to make Halloween an opportunity to start gaining skills sets in costume design and construction that would build up our repertoire, and prepare us more advanced cosplay costumes in the future. On our very small eventual to-create list, we had large projects that included more complex metal working and sewing skills, such as a more traditional Queen of Hearts and a fully armored knight, but we were most limited in space to do this work in. Although we we’re not yet pressured into making a decision, we recognized that the opportunity was prime to develop a costume as I had the available time to kill and Stefan needed all the time he could get.

By “available time” I mean that I was still unemployed and spending much of my time indoors due to incremental weather, and I was starting to suffer from a bit of cabin fever. Leisurely activities, like video games and reading, lost the ability to captivate me, and despite the fascination of both mediums, neither intrigued me greatly nor kept me mentally stimulated for any significant period of time. Admittedly, I started relying on incredibly mindless tools to distract me, and increasingly became more dependent on Pinterest for passing time. I would occasionally look for costume ideas, but understandably there were no new Halloween suggestions in February with the search terms I was using. So when Pinterest came out with their new “Interest Explorer,” I found a temporarily renewed interest in searching for costumes again as they combined all costume designs together into one stream, and allowed me to explore concepts I would not really search for.

Surprisingly, I was most inspired by the Martha Stewart Knight and Dragon Costume which I had actually seen before, but never had considered twice given that the image depicted children in costume. Strangely, it took only a second to be struck with inspiration of my own, and it dawned on me that we could go as a dragon and dragon slayer, and be able to develop any designs as complex and unique as we could imagine. Playing on the idea of an eventual knight, the dragon slayer would be a perfect segway into developing a full metal costume, but would still be within his skill range and space limitations. I, on the other hand, became inspired by the various dragon costumes online, but even more so by runway dragon scale dresses, that instantly inspired me to create a regal and elegant dragon. And thus, a costume had finally been set.

Stay with us as we continue to post about our progress on the Dragon Slayer and Dragon Queen and the eventual costume reveal.