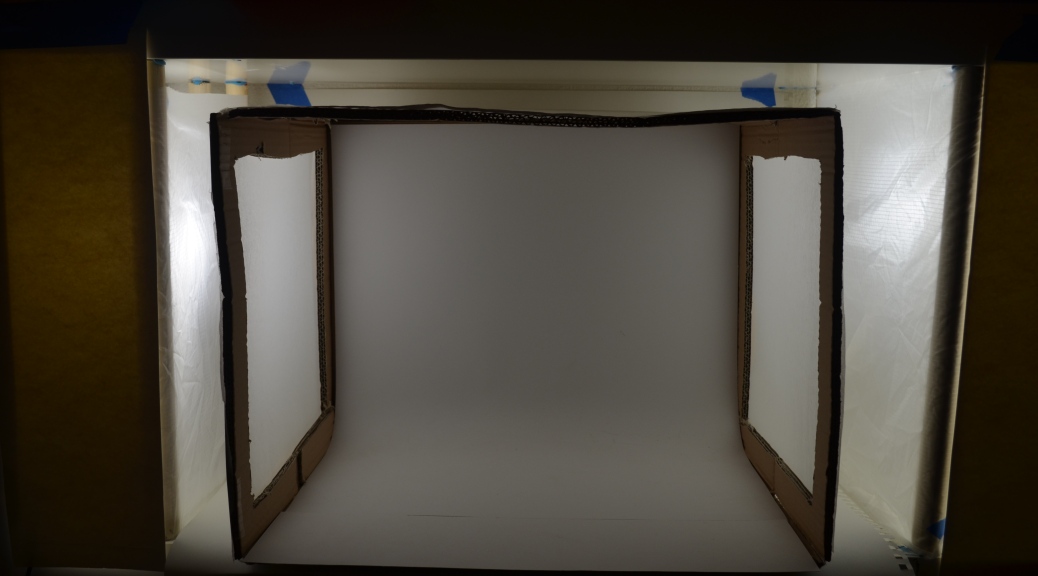 There comes a time in every bloggers life when simply taking photographs just won’t due, especially when you’ve spent hours meticulously perfecting a particular craft only to have it blurred out in photographs. This revelation came in January for me. Stefan had just received the Star Wars Imperial Assault board game and would soon receive Cthulhu Wars, which came with amazingly detailed figurines all just waiting to be painted. He spent hours setting up layers, working on toning, highlighting, and shadows, and was simply just doing some amazing work with some impromptu paints and spare time. At some point we decided that documenting his experience would be great for novice and beginning painters looking for advice, which will be posted in due time, but at the time all photographs of the process were just not fit for the task as the background was distracting and cluttered (workstations right!?), color and detail was lost due to lighting, and overall the photographs never exhibited the fine work put into it.

So I decided that what was needed was a quick and easy light box. I have seen dozens online ranging from simple sheets draped over tables, to cardboard boxes, to PVC skeletons. For my purpose, I decided to go with a cardboard box, as I had one sitting around from another board game shipment. The box itself was about 7 ½” x 13” x 18”, with an additional 7” x 18” flaps that extended the box to being 20” in depth. There were various boarder sizes online, so I decided just to use an 1” (approximately) border as it was more the size of my ruler and easier to cut along than measure anything out specifically, and it was sturdy enough for the flimsy cardboard. This gave me about a 12 x 15~16” window on the top, and two 12” x 13” inch windows. 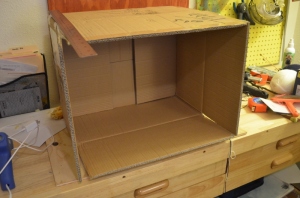 Next I took some simple transparency paper that I had sitting around and started to cover the windows. A sheet or fabric might have worked, but I didn’t have any fabric at the time that I was willing to sacrifice, in addition to the fact that I was worried about the weight of fabric on this flimsy cardboard structure and I wasn’t sure whether it was going to work. When I see light boxes online now, I tend to see the transparency layer going inside of the box, which looks nice overall. At the time I decided to put it on the outside of the box as it was just quicker to tape on and cut off the excess.

For the interior I first added the random piece of cardboard sometimes at the bottom of boxes to the bottom of the light box to create a smooth solid layer. I then proceeded to add a piece of painting paper

to the interior, and, for the time being, declared myself done enough for some quick initial tests. To light the light box, I used three warm incandescent bulbs as that is all I had around. I set up the lights, one on top and two others on the side, and took a snap shot of the Scout Walker Vehicle Stefan had been working on. The initial photographs looked decent on the screen of my camera, but when I looked at the images on my computer all of my optimist faded as the photographs themselves were far too yellow. I played for hours with various editing settings in Gimp, adjusting the setting on my camera, and trying to find other light bulbs that would make the photograph less yellow and really to no avail. I then determined that part of the problem was the paper I had been using, as it was already off white and was absorbing even more yellow from lights. So, I dashed off to Michael’s Hobby Store and bought a spendy piece of whiter water color paper.

After Installing this new paper the pictures had significantly improved, but a yellow tint still existed because of the light bulbs. Hoping that I could compensate for this with just my camera, I found that there was an Incandescent light setting on my camera which removed the yellow from indoor light. Once I discovered this, and played with various Fstop and Shutter speed settings (all differing depending on the figure), I found that with some minor editing in Windows photo editor I was able to brighten up the images while not loosing the detail or original color.

With time, the pictures got better and my techniques were honed.

I could not have guessed in January that my light box would not be enough. It seemed excessive for the figures Stefan had been painting, and had overall served us well for many months, until Stefan decided to post some of his laser cut inserts and boxes that took up half of the light box. In retrospect, putting the transparent sheets on the inside may have helped hide the edges of the box a bit more, but overall it was clear that this tiny box was not sufficient for the larger material. Like the first time, photographs were taken where there was the best light or best surface, but rarely did those two actually meet, and the photographs sufficed but did not truly demonstrate the beauty of the craftsmanship. We knew we needed another light box, but we barely had space for our cardboard box, let alone a second larger one. We considered another cardboard box, but this one would have to be enormous. We also considered a PVC light box, but did have room for a large one. Then, Stefan thought, why don’t we hack a shelf on our Ikea Billy Bookshelf into a light box.

The shelf size itself is 37” x 15” x 17”. At first we had a photograph area that was approximately 20 inches wide due to the coned light covers, but quickly increased the width to 24 inches but just using the bulbs themselves. This time around I chose to use fabric that we had in our reserve, a shiny slick ultralight nylon (ish) fabric that would hopefully diffuse the light behind it while increasing the ambient light inside the photograph area by reflecting light back into the area. To hold up the fabric, we used wooden dowels, which when combined with blue sticky tac, stayed in place with enough strength to support the lights on either side. To reduce light glare or interruption from the sides, we covered the sides with scrap painter paper, allowing the left side to be opened and closed in order to access the power strip to turn the lights on and off. The back paper was just a simple painter paper as well, but since we had bought white lights, it actually looked truer to color than any of the images I had taken before.

The results were awesome, and only needed some minor touches ups in terms of light due more to lack of a tripod than from the light box. We could also convert the background to white more easily now if needed, but overall the color of the box is spot on to that of the physical box with just a simple quick automatic setting on the camera.